James Franklin Fuller, considered an authority on the Hiberno-Romanesque style, was born in County Kerry, and educated in Blackrock, Co. Cork, and Dublin.

In the Meath area, he designed or worked on some of the following:

His name no longer resonates in Irish architecture, yet the architectural legacy of James Franklin Fuller (1835-1924) is quite remarkable. Kylemore Abbey, Ashford Castle, Parknasilla and Farmleigh are all his, but while many Irish people would recognise one or more of these, very few indeed could name their architect.

In 1850 he went to London where he qualified as an architect, and later moved to Manchester, Sheffield and back to London.

In 1862 he became a district architect under the Irish Ecclesiastical Commissioners in Ireland. His charge was the North Western Division with residence at Killeshandra, Co. Cavan. He later set up his own practice at 179 Great Brunswick Street, Dublin and a few years later was appointed architect to St. Patrick’s Cathedral in 1873, as well as to a number of other institutions.

He ran a busy practice, though, according to his memoirs, with a gentlemanly disregard for standard clerical procedure, not keeping ledgers or books and disdaining keeping financial records. He claimed never to have owned a razor, an assertion borne out by his marvelous bushy beard. 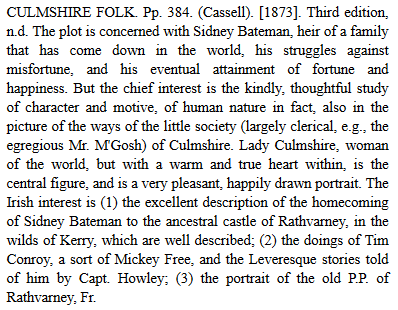 Very eccentric and inveterately snobbish, Fuller wrote high-Victorian melodramatic novels, and boasted of a connection via his wife with one of Napoleon’s Marshals, not to mention descent in his own right from no less than Charlemagne. His writings include Culmshire Folk (Cassell, 1873) and John Orlebar, Clerk (Cassell, 1878) and many articles of a historical and genealogical nature.

Fuller died suddenly, after a few hours’ illness at his house on Eglinton Road, Dublin, on 8 December 1924. He was said to have ‘retained all his faculties and mental vigour to the end’, and ascribed his longevity to a sound constitution which had not been undermined by excess – he ate only two meals a day, drank mainly water, confined his pipe smoking to the period after dinner, and kept his bedroom window open at night throughout the year.He is buried in Mount Jerome Cemetery, Dublin.

Want to tour the buildings of James Franklin Fuller? Email hello@ancienteastboynetours.com to set up a tour!