Certainly a touch of frost in the air.

Last week we had a lovely group from Minnesota – and the sun shone like it had never been away and was wondering what all the fuss was about – and Kells is wondrous in the sunshine.

Other than that they had a great time, big smiles for the camera so the woollies obviously worked!

They were impressed to learn that Meath was twinned with Cary, North Carolina, something that we should make more use of.

This group had the extra excitement of meeting the Chief of Ireland – no other than Taoiseach Enda Kenny, who was in Kells that day for lunch in the Headfort Arms Hotel.

“What – just having lunch”? one exclaimed.  “You don’t get Obama just having lunch in a country hotel!”  That, ladies and gentlemen, is the beauty of Ireland.  Anything could happen just about anywhere.

On Saturday a group of French food bloggers were in town, courtesy of Tourism Ireland, and we put on a little pageant for them in the evening in the Hotel.  Gemma McGowan did a song & story of Lugh, and Tiárnan de Hal and Seamus Byrne “monked up” – put on monk robes and chanted their way in to accompany my story of Cormac mac Airt and Colmcille.

There was a round of applause when the group learned that Kells had made the tentative list with UNESCO to become a World Heritage Site because of its early Christian importance on a European wide scale.

It’s amazing how locally we are very blasé about this fact, which is of huge potential importance and is an impressive stoop on which to have clambered. 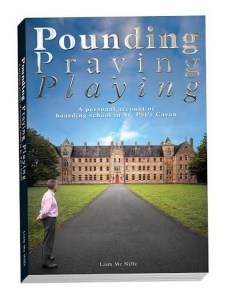 This week we look forward to an Afternoon Salon with Dr. Liam McNiffe on Thursday afternoon at 3:30 p.m. in our premises in Market Street.  Our move to the new premises is awaiting the arrival of electricity – without which none of us these days can function!  “Pounding Praying Playing: A Personal Account of Boarding in St Pat’s Cavan” is Dr. McNiffe’s fascinating personal memoir of the Irish education system in the early 1970s.

2 thoughts on “Winter is Coming …”